Report from final day of U19 Europeans

England claimed the team title, Switzerland were runners up and the home team won the bronze medals.

In the third place match, the home team of Czech Republic played Ireland. In the first match Marek Panáček played much better than in the semifinal and beat Conor Moran for the first time in his life, to get the first point for home team. Viktor Byrtus confirmed he was by far the best player of the tournament and continued his dominating form against Sam Buckley to get the winning second point for Czech team,  which secured them bronze medals for the third year in a row. Viktor did not drop a single game in the whole tournament (both individual and team events).

The final between England and Switzerland began with a match between Ben Smith and Campbell Wells.  Smith was a better player up to 10/9 in the third, when he had matchball, but then Campbell started to play really well, he saved the matchball, won the third, and the fourth was very close all the way.  Englishman, Smith triumphed and England were in the lead. Yannick Wilhelmi was the slight favourite of the second match against Sam Todd, but Sam was saving his best performance of the tournament for the final. He won the first, Yannick got back into the match to win the next two, but Sam played a very good fourth game to draw level. At the beginning of the fifth Yannick was just too nervous and made too many mistakes. The big lead he gave to Sam was enough and Sam managed to win the decisive second point for his country. England celebrated their 33rd title in 36th final appearances. 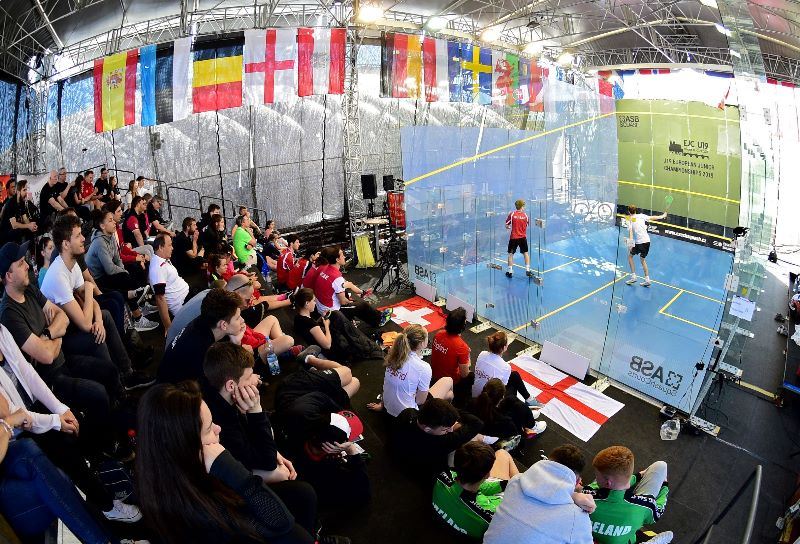